Jefferson (on the right), with his father, one of his brothers and his sister, Shalom.

During my December trip to Ghana last year - Shalom, who had been sponsored at the beginning of the year - was absent for my whole trip, and in fact hadn't reported to school after the summer holidays. We got to know that this was because Shalom's mother was sick in hospital and since Shalom was too little to stay at home, look after herself and come to school by herself, she was staying with her mother in hospital. However, my last trip this year, Juliet (my Ghanian partner) and I delved deeper into the family's situation and realised things were far worse for Shalom and her siblings than we had previously understood.

It turns out that her parents belong to this extremely odd branch of the Apostolic church which doesn't allow any medication whatsoever. In fact, the mother had never been near a hospital, but was mentally ill and tied up at home she was so bad, and Shalom as the only girl had stayed out of school to look after her mother and her siblings. All five children would of course have had to have lived with the trauma of seeing their mother tied up and distressingly mentally ill. The reason their father was tying their mother up was so that he could go out to try and get what little work he could.

So I did deal with the father and said that I would find scholarships for his other four children, as Shalom had, but I would only do it if he agreed to let the children take medicine. The two littlest have got rickets which is easy thing to cure with calcium and vitamin D tablets. And he agreed. Jefferson is the oldest of the children and has missed so much school we've had to put him in to Primary 2. But as with all the children who come to us who have missed school or come from a state school rather than starting with us in nursery, we run catch up lessons at break times which he attends. 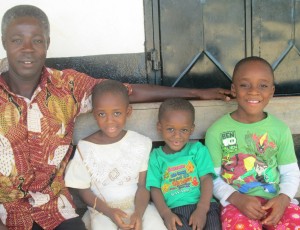