One of the brightest children in the class

Abeku (right) is in P3. His teacher says he’s the brightest in his class and very hard working. His favourite colour is blue, his favourite game is football and his favourite food is rice and stew.

He comes from an extremely poor family who used to be relatively OK, but through bad luck are now really struggling. Abeku’s father used to be an administrator at a private school but lost his job four years ago when the school closed down, and was then involved in a motorcycle crash – through no fault of his own - which was so bad he almost died. He incurred huge debts in health care recovering from the crash, and in trying to support his family while he was out of work - he has six children. Abeku’s mother is a petty trader, but can’t work at the moment because she’s got a baby and a toddler at home.

You have no idea what Abeku’s sponsorship means to the family. 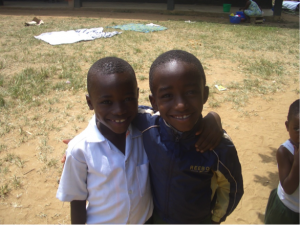