A few months ago, our school bus driver came in to ask us about Louis. At three and a half he had never spoken a single word which seemed odd to the bus driver, who was a friend of Louis’ mother. There was nothing wrong with Louis in a physical sense, so we wondered what could be causing Louis’ muteness.

In asking about Louis’ background, it turned out that he had been looked after by his grandmother from birth until then, because the mother had to live away to work to support the grandmother, Louis and herself. There was nobody else in their little family. The grandmother had had a stroke and while she could still crawl and was able to look after him physically, she could no longer speak. We half wondered whether this had anything to do with it.

The bus driver had really taken a shine to Louis, and begged us to take him. We usually wait until we find a sponsor for new children, but the bus driver was so worried about him, we agreed to take Louis for a term in the hope of finding a sponsor for him.

Within a month, Louis was beginning to make some small sounds. And every week he now seems to be making up for lost time. When I was in Ghana last time he waved at me and very clearly said ‘hello’. So we think the reason his speech wasn’t developing was simply down to lack of verbal-aural stimulation, and that he stands a very good chance of recovering most of his language skills at our school.

Everybody in Ghana – especially the bus driver! – and I are extremely grateful to the sponsor who now supports Louis. 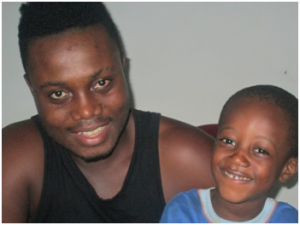